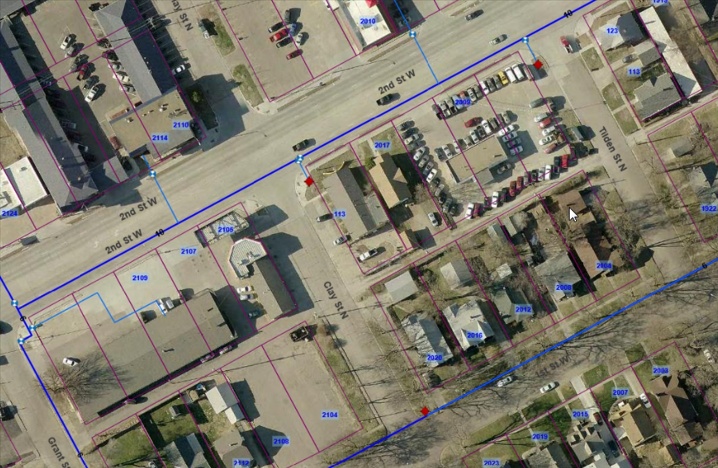 Geographic Information Systems (GIS) is a subgroup of the Engineering Division that provides mapping and GIS support for the computer user departments and the public. The division is responsible for maintaining all GIS data sets, providing technical assistance, training department personnel in the use of GIS software, and developing GIS applications.

GIS is a system of hardware and software used for storage, retrieval, mapping, and analysis of geographic data. Practitioners also regard the total GIS as including the operating personnel and the data that go into the system. Spatial features are stored in a coordinate system (latitude/longitude, state plane, UTM, etc.), which references a particular place on the earth. Descriptive attributes in tabular form are associated with spatial features. Spatial data and associated attributes in the same coordinate system can then be layered together for mapping and analysis. GIS can be used for scientific investigations, resource management, and development planning.

GIS differs from CAD and other graphical computer applications in that all spatial data is geographically referenced to a map projection in an earth coordinate system. For the most part, spatial data can be "re-projected" from one coordinate system into another, thus data from various sources can be brought together into a common database and integrated using GIS software. Boundaries of spatial features should "register" or align properly when re-projected into the same coordinate system. Another property of a GIS database is that it has "topology," which defines the spatial relationships between features. The fundamental components of spatial data in a GIS are points, lines (arcs), and polygons. When topological relationships exist, you can perform analyses, such as modeling the flow through connecting lines in a network, combining adjacent polygons that have similar characteristics, and overlaying geographic features.