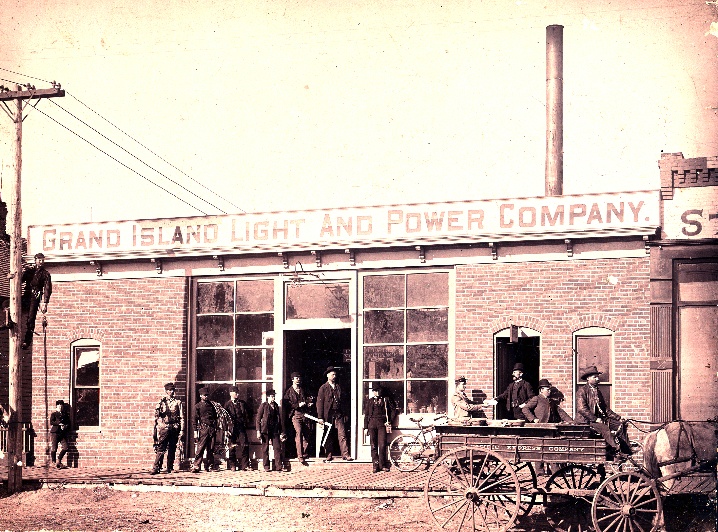 The history of Grand Island Utilities dates back to just after Grand Island was incorporated as a city. Hall county, where Grand Island is located within, was originally settled in the summer of 1857 by a group of about thirty five predominately German settlers. During those first years the settlers had a hard life as they struggled with the elements. They survived severe winters, struggled with summers that were either too hot or too wet, battled grasshoppers and prairie fires which ruined their crops and nearly wiped out their homes. Their experience with the Indians were generally friendly and helpful, however some experiences were otherwise.

Grand Island wasn't actually settled until 1862, when most of the settlers moved from the original settlement to the town-site that was laid out by the Union Pacific Railroad, along the rail road right-of-way. The town-site grew into a small city and was incorporated on December 10th, 1872.

Records do not set a specific date on which Grand Island Utilities was formed. Rather it can most likely be said that it got it's start when the first water mains were installed by the City of Grand Island for fire protection. Fire was a big concern in the early days as a major, uncontrolled fire could nearly destroy every building in town. The only source of a supply of water great enough to battle a fire was the Union Pacific Railroad. The railroad pumped and stored a large supply of water for their steam engines. In 1879 the city council negotiated a ten year contract with the Union Pacific to supply fire protection water for the down town area. As early as 1881 wooden water mains were installed to supply water to about three blocks of businesses along third street.

Within a short time after the original fire main system was installed, a demand for running water in homes and businesses came about, and it was determined that Grand Island needed a complete 24 hour a day water supply system. The railroad wanted to get out of the water supply business and concentrate on running the railroad. In September of 1885 voters approved a $35,000 bond to construct a water pumping plant and distribution system. The original water pumping plant had 35 driven wells inside a 14 foot pit, two steam driven pumps and was located on the southwest corner of Fourth and Pine streets. The system was designed to supply one million gallons of water a day. The system was ready for service in June of 1886 and thus the Utility was born about this time as it supplied water to it's customers. The system has since grown from it's first couple of customers to meet the demands of 13,500 customers.

There had been considerable debate and planning on the part of the city to own and operate their own municipal electric power generation and distribution system as far back as 1900. As early as June 1887, Grand Island had at least fifteen electric street lights. Electric lights were chosen over gas lights even though gas lighting was by far the most popular form of illumination at the time. Several private firms, the Grand Island Electric Company and Grand Island Gas Company supplied electricity until the city purchased the lines and poles from them in April of 1906. This was the result of demands by citizens to provide electric power 24 hours a day. It was thus voted upon and approved by the citizens of Grand Island that the City purchase $35,000 worth of bonds to build a light and power plant and provide service to all the community.

The first two electric generators were built where the original Pine Street station continues to stand today (about 1/2 block south of 4th and Pine Streets) and were accepted by the city on April 9th, 1906. The electric generators were engine driven with a combine capacity of 325 kilowatts. By today's standards, that's enough generation to supply the needs of one or two large grocery stores, or about 50 homes. It is not known if these engines that turned the generators were steam driven (piston) engines or internal combustion engines.

From 1906 to 1963, the Pine Street Station continued to supply most of Grand Island's electric power. In 1957, the C.W. Burdick station located on south Cherry and Bischeld streets started to take over for the aging Pine Street Station and to meet Grand Island's growing demand for electricity. Continued increases in electrical use and limited supplies of natural gas and oil forced the city to build another power plant.

In 1981 the Platte Generating Station was completed and placed in service. Today, Platte Generating Station efficiently generates about 96% of Grand Island's electrical power, the C.W. Burdick Station stands ready as a dependable back-up supply and peak plant for hot summer days. After 75 years of service to our community, the last time the generators turned in the Pine Street Station was in 1981. The power station was officially retired shortly afterwards. The Pine Street Station no longer houses any generators or boilers, it continues to house one of our cities domestic water pumping stations. While the original building continues to stand as a land mark in down town Grand Island, it is being re-modeled to house the Water Department.

It should be noted that base electrical rates today are about half of what they were in 1906 to the residential customer. Today, Grand Island Utilities owner/customers enjoy some of the lowest electrical rates in Nebraska and the country, and serves as a true testament to the cost effectiveness and quality of service public power provides.

In addition to pumping water and generating electricity, Grand Island Utilities also supplied ice to it's citizens. Between 1920 and 1956, Grand Island Utilities was known as the Grand Island Water, Ice and Electric Department. In the spring of 1920, voters approved a $50,000 bond issue to build the new ice plant adjacent to the Pine Street Station. Before refrigerators were in use in homes, people had to use ice to keep perishables cold. In the early days, ice was cut from ponds in the winter time, and stored in ice houses for use later in the year.

Eventually, refrigeration was invented and gained wide-spread use on an industrial scale. Refrigeration for home use as we know it now was either not existent or very expensive. In January 1921 the city delivered it's first ice to customers via the artificial ice plant. Demand for ice peaked in 1945 to over 8,200 tons a year. By the time the ice plant closed in 1956 ice production was down to 2,000 tons a year. The building was razed shortly thereafter.